Modernisation theory is largely based on the view that to develop means to become ‘modern’ by adopting Western cultural values and social institutions. It is suggested that undeveloped societies subscribe to value systems and institutions that hinder the development process.

Development as an evolutionary process

The leading modernisation thinker, Bill Rostow, suggested that development should be seen as an evolutionary process in which countries progress up a development ladder of five stages.

1) Undeveloped societies are ‘traditional societies’ dominated by institutions such as families, tribes and clans, within which roles are ascribed (i.e. people are born into them) rather than achieved. Production is agricultural.

2) The ‘pre-conditions for take-off’ stage involves the introduction of material factors such as capital and technology from the West in the form of capital investment by Western companies and official aid.

3) The ‘take-off stage’ is the most important and involves traditional attitudes and social institutions being overcome and replaced with their Western equivalents. For example, achievement replaces ascription and the nuclear family replaces the extended family or clan/tribe as people become more geographically mobile in their search for work in the factories set up by Western companies.

4) The ‘drive to maturity stage’ is marked by export of manufactured goods to the West as the country takes its place in the international trading system.

5) Development is achieved in the final stage which Rostow calls ‘the age of high mass consumption’. In this stage, the majority of citizens live in urban rather than rural areas and enjoy a comfortable lifestyle. Life expectancy is high and most citizens have access to health-care and free education. 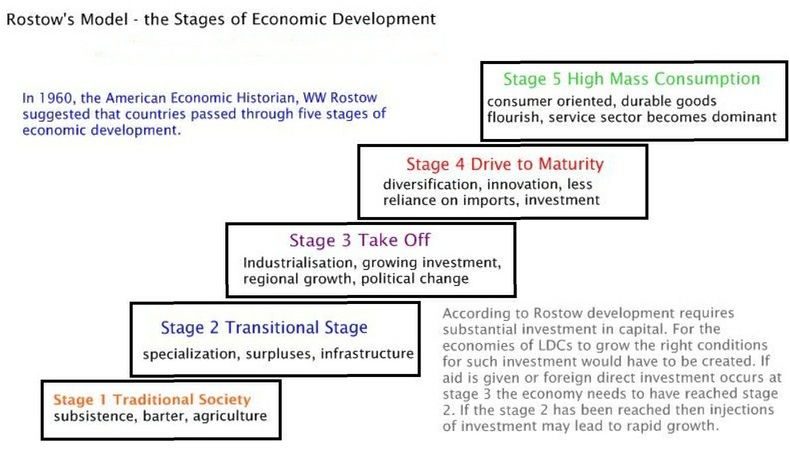 Other modernisation writers such as Parsons have stressed the need for cultural change in the LDCs if development is to come about. In particular, traditional religions such as Islam and Hinduism are seen to be a problem because they are perceived to be:

Lerner suggests that cultural change could be encouraged by educating the children of LEDC élites in Western schools and universities.

Modernisation theory has been very influential, particularly on US foreign policy, but it has attracted four key criticisms.

The neo-Marxist dependency theory rejects the view that the people of LDCs are responsible for the failure of their societies to develop. Instead, Andre Gunder Frank, the leading dependency theorist, suggests that lack of development is because Western nations have deliberately under-developed them.

Frank argues that there exists a global system of capitalism in which core nations such as the USA and UK exploit what Frank calls the peripheral nations or LDCs. The periphery is kept in a state of dependency and under-development because the developed world requires cheap raw materials and labour. Frank argued that this relationship of exploitation and dependency occurred historically through slavery and colonialism, and continues today through Western dominance of the international trading system, the practices of multinational companies and the LEDC’s reliance on Western aid.

Frank argued that the trade in slavery resulted in tremendous profits for both slave-traders and plantation owners in the 18th century. This led to a superaccumulation of capital which was invested in Britain’s industrial revolution and consequently helped kick-start industrial development in the UK.
According to Paul Harrison, in the 18th century Europe was able to use its advanced military technology to conquer and colonise many parts of the Third World. First World countries exploited the colonies for cheap food, raw materials and labour. For example, land traditionally used for growing food was turned over to the production of cash crops for export.

The way world trade is organised today is a legacy of colonialism. Most colonies have achieved political independence but their economies still tend to be based on exporting cash crops and raw materials to the West. Moreover, many LDCs find it difficult to achieve full economic independence because many are overdependent on either one or two primary products or Western demand for those products. Therefore, any over-production or fall in Western demand can have a severe effect upon LDC economies. Western nations further limit the export earnings of LDCs by setting the prices for many LDC products and setting tariffs and quotas which tax or limit LDC products entering the First World, especially manufactured products.

Frank and others such as Therese Hayter argue that traditional forms of colonialism are giving way to new forms: neo-colonialism. At the forefront of this type of exploitation are the multinational companies (MNCs). In their search for profit, these companies allegedly exploit LDCs for cheap labour, cheap raw materials and new markets.

The search for new markets encouraged Western companies to expand in size and market their products globally. These multinational companies (MNCs) imported raw materials from the LDCs and exported manufactured goods back to them. After World War II, increasing numbers of companies started to produce manufactured goods in the LDCs, taking advantage of cheap labour, relaxed health and safety laws and low taxes.

Simpson and Sinclair point out that MNCs now dominate the capitalist world economy and many have greater economic and political power than LDCs. Moreover, the MNCs are not accountable for their actions in law. Many have been accused of interfering in the internal politics of LDCs to ensure that local élites supportive of their activities retain power. Others have been accused of environmental destruction and pollution and playing a major role in the eviction of native peoples from their land. Moreover, some have been accused of marketing drugs and pesticides banned in the West. Illich argues that MNCs are guilty of creating ‘false needs’ in their marketing of products in LDCs which may have detrimental effects on health such as high-tar tobacco, soft drinks such as Coca-Cola, hamburgers and baby-milk powder.
According to Marxists, then, MNCs do not invest in LDCs because they want to kick-start their economies. Their motive is primarily profit.

Another form of neo-colonialism according to dependency theory is official aid. Bilateral aid refers to the flow of resources from one country to another – most usually in the form of loans but also as weapons, medicines and human expertise. Multi-lateral aid involves financial institutions such as the World Bank and the International Monetary Fund lending money to LDCs.
Most loans to the Third World involve interest. However, economies grow too slowly and long-term development projects such as irrigation schemes, dams, etc. can be slow to generate the predicted income or may fail. In the meantime, the interest builds up and can eventually outstrip the initial loan.
By 1980 LDCs owed the West $600 billion. By 1998, this had increased to $2.2 trillion. Most of the countries in real trouble are extremely poor African states, e.g. in 1998 Sub-Saharan Africa owed $222 billion (which makes up 71% of its national earnings) whilst Mozambique and Ethiopia spent almost half their export earnings servicing their debts. Nearly a quarter of the aid African countries receive this year will be immediately repaid to the West to repay debts.

Hayter argues that debt has a number of consequences.

In 2000 many Western governments including the UK announced that they were looking at ways in which LDC debt could be cancelled or reduced. In 2001 the UK announced its intention to put a stop to tied aid.
In summary, Frank’s theory of dependency suggests that the LDCs can never develop so long as they remain part of the world capitalist system. For Frank, development and under-development are two sides of a world process by which the First World developed at the expense of the LDCs. Such poor countries are locked into a system that is almost impossible for them to escape. One possible solution is ‘isolation’ as in the example of some Islamic states such as Iran and Afghanistan. Frank also suggests a socialist revolution may be necessary in some LDCs to overcome the ruling classes who collaborate with the West. However, Frank believes that sooner or later, the West would reassert its control.

John Goldthorpe and other liberals have argued that colonialism did have positive benefits because it provided LDCs with a basic infrastructure in terms of transport and communications. Never colonised LDCs such as Ethiopia and Afghanistan experience severe problems today because they lack the infrastructure provided by the colonial powers. Goldthorpe also points out that those countries without colonies such as the USA and Japan have performed economically better than those with empires.
The Marxist, Frank Warren argues that colonialism and neo-colonialism were, on balance, conducive to development rather than under-development. However, Hancock notes that a great deal of the aid that remains within LDCs ends up in the bank accounts of LDC élites. Despite extensive investment and aid, some LDCs have experienced little or no economic growth. Some countries such as Bangladesh have grown poorer despite increased aid from the West over two decades.

Criticisms of both modernisation & dependency theory

Both modernisation and dependency theory make the mistake of treating LDCs as homogeneous (i.e. as having the same characteristics). They fail to understand that value systems and institutions tend to be culture-specific. For example, Ethiopia and Somalia may be neighbouring LDCs but their cultures are quite different from one another and may each require different development programmes. Some sociologists therefore argue that each LDC needs to be analysed and understood independently.

Both theories also make the mistake of treating capitalist societies as homogeneous and consequently fail to acknowledge that there are different types of capitalism and cultural reactions to it. For example, American capitalism (based upon Fordism) tends to have a different character to Japanese capitalism (which tends to be more paternalistic).

Finally, Foster-Carter accuses both theories of presenting the relationship between LDCs and the West in terms of conflict or ‘them versus us’. For example, modernisation theory sees LDCs as ‘backward’ societies that ‘need’ our help to develop, whilst dependency theory sees ‘us’ as exploiting ‘them’ for cheap labour and raw materials. Foster-Carter argues that this disguises the similarities that exist between LDCs

Use the information above to answer the questions on this website.