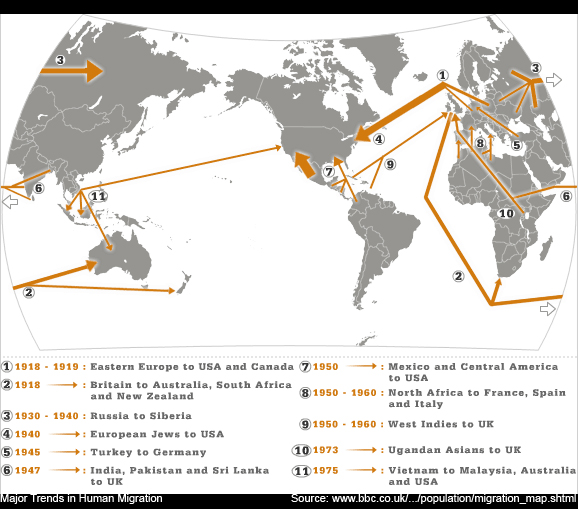 On the move: 232 million migrants in the world
The number of international migrants has soared since 1990 as more and more people are leaving their country of origin. So who’s migrating and where are they going?

Task 1) Once you have looked at the resources above. Read pages 42-46 in Patterns and Change and answer questions 1-4 on page 46.

The Causes of Migration: 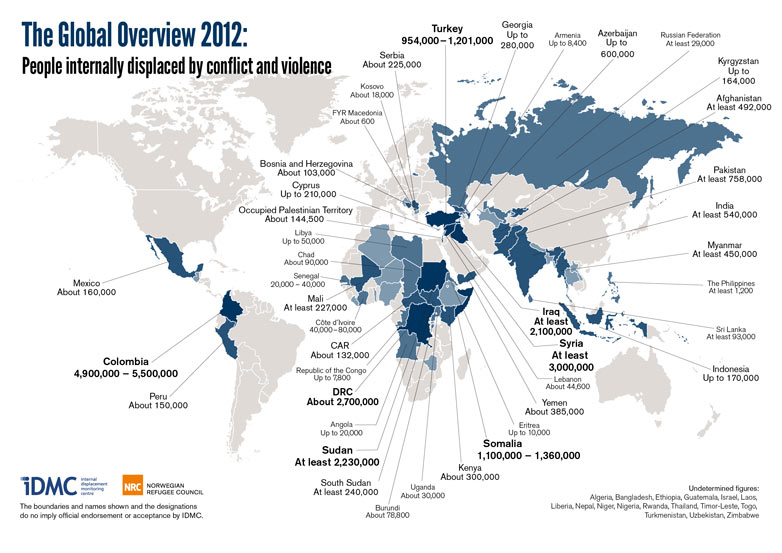 Using a range of articles and links from this page you are going to build up a case study of the movement of people from North Africa to Italy.

Thousands of migrants have crossed the Mediterranean in the past few days, with European authorities warning that thousands more are waiting in Libya to make the journey. Find the key numbers

War, poverty, repression: Why so many Africans risk their lives to migrate

Task: Describe the geographical location of Eritrea and its climate.

What went wrong in Eritrea….

Perhaps evidence of that can be found in the food crisis in the Horn of Africa. Is the drought affecting Eritrea? There are neither independent observers nor international organisations in the country. NGOs are banned from operating.

A friend of mine who lives in the capital, Asmara, tells me he can’t afford to go to the market because prices are too high. The government tells a different story, praising the country for stabilising food prices and for its efforts to ensure food security.
The only people who can afford to shop at the market are those who benefit from the country’s largest safety net – remittances from family members living abroad.
One can only surmise what is really happening in this small country of 4.5 million, whose young people are fleeing to neighbouring countries, where rationing is widespread, independent media do not exist, and all accurate data is government property. I suspect there is a drought in Eritrea, although its effect may not be as severe as in Somalia or other neighbouring countries. But Eritreans are used to going hungry.

2) The most dangerous journey in the world.

Task: Use the interactive map above to describe the journey taken by Mehari Solomon from Eritrea to the UK. Make note of the geographical locations and the hazards he encounters. You may do this in note form or using bullet points. 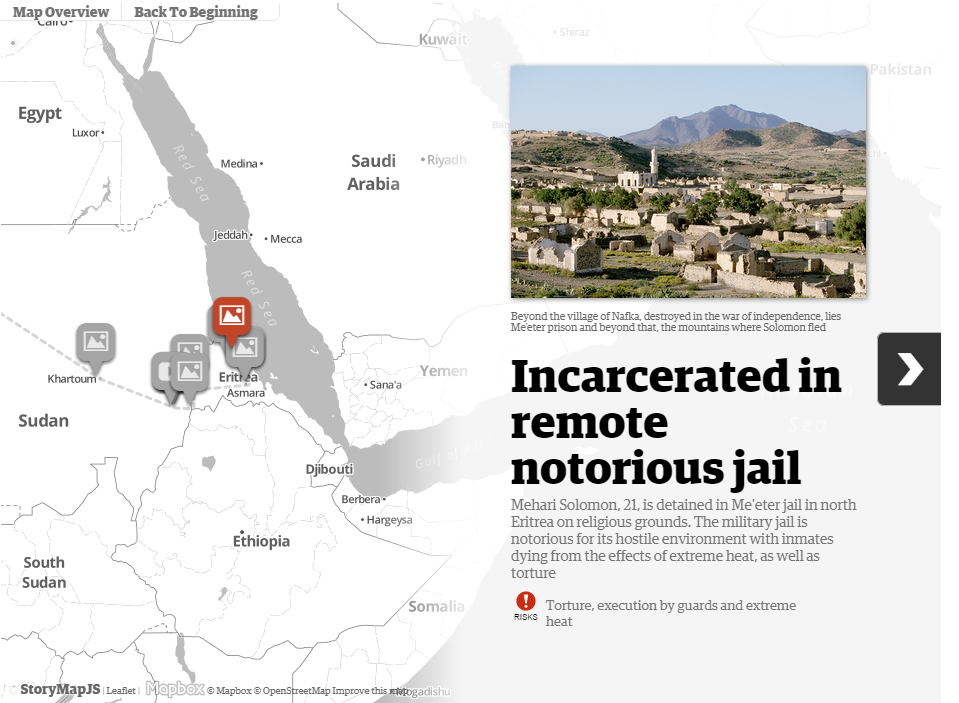 3) Why are so many Eritreans undertaking such a dangerous journey?

Senior military officers kidnap and hold to ransom youngsters, and many are sold on to human traffickers, according to report

Eritrean youths are being kidnapped by senior military officers, smuggled into Sudan and held to ransom, according to a report by Dutch and Swedish researchers. The captives are threatened with being sold to people traffickers if they do not raise tens of thousands of dollars. Some are freed if they raise the ransoms. Others are sold on to Bedouin traffickers in Sinai, even after money has changed hands, only to be tortured to extract further cash from their relatives.

4) What happens to those that make it to Europe? The impact of international migration

Task: Read through the following information and note down the positive and negative impacts that international migration has on both the country of origin and the country of destination. 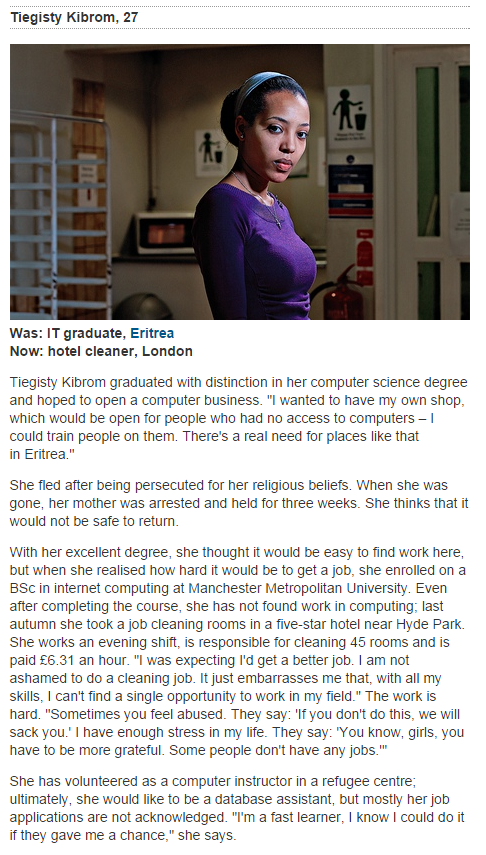 Immigrants to the UK since 2000 have made a “substantial” contribution to public finances, a report says.

An influx of north Africans causes a headache for the government

About 30% of Africa’s university-trained professionals and up to 50,000 Africans with PhDs now live and work outside the continent. The problem is particularly acute in sub-Saharan Africa. 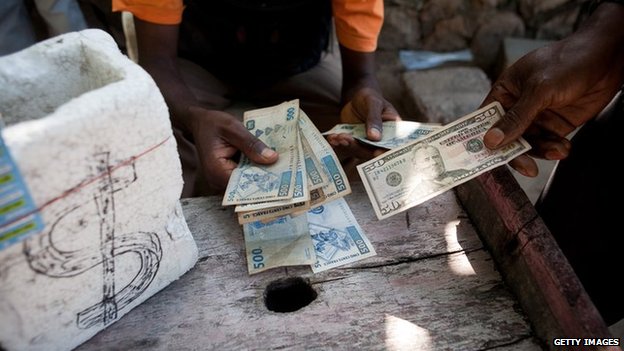 Africans are helping themselves more than aid workers are, according to new research.

1) What is meant by the phrase,’Brain Drain?’

2) What is a remittance?

3) Use examples to explain why remittances are so important to the developing world.

Use this sheet to summarise the case study of people migrating from Eritrea and other North African countries, into Europe.

1) Using the information from the links above. Summarise the Syrian Refugee Crisis. Why? When? Who? How many? etc.

2) What impact are the refugees having on the countries they enter?

3) What assistance is being given to the refugees by the international community?

4) Use the stories of actual refugees to look in more detail at the reason behind their decision to leave and become refugees? How did they chose their destination? Is Lee’s model relevant in the case of refugees?

Use this sheet to summarise the case study of people migrating from Syria to neighbouring countries.

Work through the exercise from geographyalltheway.com. Click on the banner to go to the page.

Remittances represent an enormous cash flow worldwide. In many countries with substantial internal mobility, remittances are also abundant at the national level. For instance, estimates for China show that nearly US$30 billion were transferred from urban to rural areas in 2005 (Gong et al., 2008)

The term ‘remittances,’ refers to the money that migrant workers send back to their communities of origin.

Use this sheet to summarise the case study of internal migration in China.

Does migration change life for the better for people from poor countries?

Referring to a specific example, describe the positive | negative impacts that national (internal) migrations have at their origins | destinations. [6 Marks]

Referring to a specific example, describe the positive | negative impacts that a international migration has had at it’s origins | destinations. [6 Marks]

“Migrations within a county’s borders have greater negative impacts at their origin than their destination.’ Discuss this statement. [15 Marks]